I find it frustrating that I read books, only to forget the title and author. The plot becomes muddy and any recommendations to my friends become guess work. To combat this I am now going to keep a book list. This is what I read in 2014. Agree with what I have to say?

Ordinary Thunderstorms, William Boyd
A gripping journey through London’s underworld. Adam Kindred, an otherwise respectable scientist, witnesses a murder and then goes on the run from a hitman and the police. Previously invisible people become Adam's friends; prostitutes, addicts, illegal immigrants and religious fanatics. I could really picture Adam amongst the people I saw when I cycling through London.  9/10.

A Dead Hand: A Crime in Calcutta, Paul Therroux
Atmospheric account of author, Jerry Delfont, struggling in vain against his writer's block whilst living in Calcutta. Jerry becomes obsessed with a mysterious, tantric, wealthy US woman in Calcutta whilst investigating the appearance of a child’s hand in her son’s friend’s room. The main character is annoying, the plot a little predictable and the sex scenes are terribly written. 5/10.

Animal Farm, George Orwell.
20th century classic that, surprisingly, I was never forced to read at school.  A parody of the Russian revolution, animals overthrow their farmer master aiming to create an egalitarian society. Rather predictability things get rapidly worse. Very sharp characterisations. Wish I had read it earlier. 8/10.

Londoners: The Days and Nights of London Now - as Told by Those Who Love it, Hate it, Live it, Left it and Long for it, Craig Taylor.
Exactly what it says on the tin; an oral history from a cross section of London. Allowed me to reflect on my own experiences in London before I left it. A book to dip in and out of. 7/10.

An Ice Cream War, William Boyd.
Yet another great book from my favorite contemporary author. A black comedy that focuses on the fight between British and German forces in East Africa. A series of characters on both sides of the conflict intertwine. Historically interesting, wickedly funny. 8/10.

Down and Out in Paris in London, George Orwell.
A memoir of George Orwell’s time living on the breadline in Paris and London in the late 1920’s and early 1930’s. Orwell obviously cared about the plight of the working classes but his situation in both cities seems improbable and a little bit like poverty tourism. 6/10.

The Hundred Year Old Man Who Climbed Out the Window and Disappeared, Jonas Jonasson
An unlikely but very amusing story of Allan Karlson, a hundred year old man who escaped from his nursing home and embarks on an adventure running from both the Swedish police and gangsters with a suitcase of money intended for a drugs deal. Through flashbacks we learn about Allan’s run ins with various major events and people from the 20th century. Forest Gump but much much better. 10/10.

The Woman Who Went to Bed for a Year, Sue Townsend
A light hearted comedy by the author of Adrian Mole. Eva, a world weary house wife takes to bed for a year, inviting in a harem of carers, followers and admirers. A simple page turner with an array of well observed characters. Unfortunately it is hard to warm to the central character and her course of action, leading to an increasing sense of frustration as the book nears its end. 7/10.

The Time Travellers Wife, Audrey Niffenegger
Glorified chic lit about the relationship between Henry, a time traveller, and his long suffering wife Clare. Clare has to contend with prolonged periods of absence and unpredictability of her husband’s disappearances. Emotionally deep, sometimes straying into emotionally trite. 6/10.

Heligoland: The True Story of German Bight and the Island That Britain Forgot, George Drower
A focused history about Heligoland, a weather beaten rock in the North Sea. Once an unloved British colony, it was traded with Germany for Zanzibar and territorial concessions is East Africa. Interesting how one little island played such a big part in the scramble for Africa, the course of WWI and the British search for the atomic bomb. 7/10.

We Need to Talk about Kevin,  Lionel Shriver
Mid naughties cult read. Eva writes to her husband about the childhood of Kevin, her son and high school mass murderer. A thought provoking but uncomfortable read that upsets as well as entertains. 8/10.

The Heart of Darkiness, Jopseph Conrad
Early 20th century novel that is the inspiration for Apocolypse Now. Charles Marlow gives an account of his experiences as an ivory transporter in Belgium Congo. Seen as a book that gets across the horrors of colonialism, but also one that perpetrates the idea of African people being “other”.  6/10.

Posted by Henry Wilkinson at 19:38 No comments:

Email ThisBlogThis!Share to TwitterShare to FacebookShare to Pinterest
Labels: Books

Hot, sticky, dark and, when I finally found the light switch, surprisingly big. These were my first jet lagged impressions of the flat late last Tuesday night. Our new home. Flat 308, The Arts Centre, Mantin, Malaysia. That was the moment it sunk in. This is real.

Having first decided to emigrate in February, August’s move to Malaysia always felt like a far off theoretical concept. It loomed somewhere in the distance, to be dealt with at a later date.  “London living” seemed to be more immediate, predictable and important. My cycle to work, the ten o’clock banana, lunch break, three o’clock tea and the rush for the office door at the earliest socially acceptable time;  this was the rhythm of my life. Malaysia was always well after a work deadline, a birthday, a weekend away or wedding planning. There was always something more immediate until, on 1 August there wasn’t, my new nephew was born and then the only red letter day was the flight.

After being dropped of at the flat we made vague attempts unpack and make the place look presentable. Neither of us knew what to do or where to start. That night I slept restlessly in two chunks, my body not being able to process the loss of seven hours and my mind wondering what I had got myself in for. The white washed walls looked empty and alien and I was reminded of similarly sterile walls and miserable evenings in Accra. This was not home. Even Lucy next to me did not seem the same Lucy I was talking to in London.  Somehow, everything that was once firm and solid seemed to shift.

Opening the curtains in the morning, we had our first glance at the outside world, a turquoise blue swimming pool and tennis courts sandwiched between playing fields. Behind our accommodation block is the school itself, an array of long colonial style blocks linked by covered by pan tile walkways.  Perhaps on reflection, there are certainly worse places to end up. Certainly a little different to my living arrangements in Ghana.

The school at the moment is very quiet, only being populated by administrative staff, the new teachers and senior management. It is hard to imagine what it will be like when 700 hundred boarders turn up this Sunday. I think we are all looking forward to their arrival so life can take on some form of routine. That said, the gradual introduction to school and Malaysia has been most welcome. We have been given the opportunity to explore the school ourselves, use the array of sporting facilities and get to know the local area. Little by little what was alien is starting to become more familiar. Thanks to the arrival of our shipping from the UK, and various forays into Kuala Lumpur, Tesco and Ikea, the flat now feels like home. We have also seemed to have settled into a good social scene, with a number of friendly faces only too ready to invite you out for dinner.

As you will see from the photos below the grounds are gorgeous, if a little quiet. 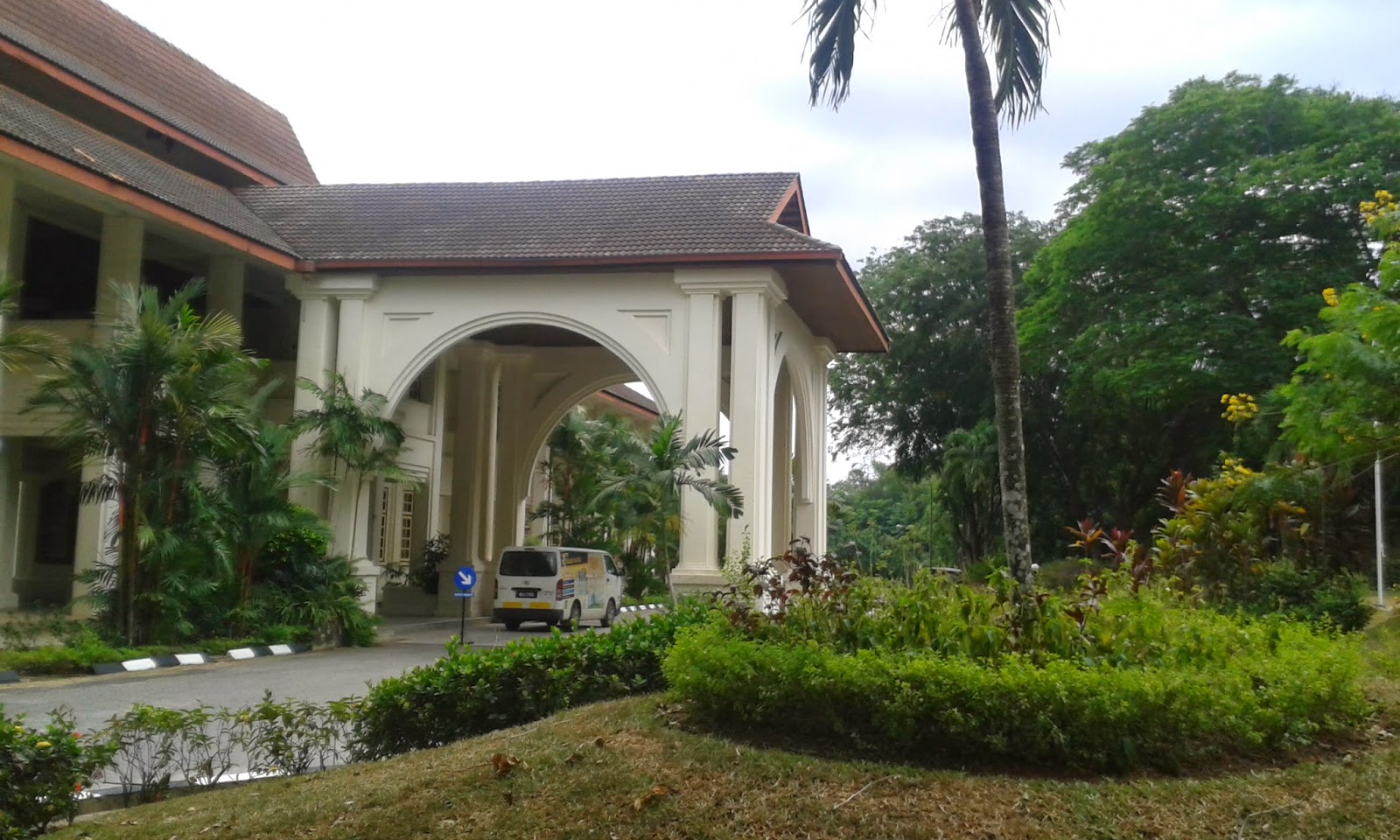 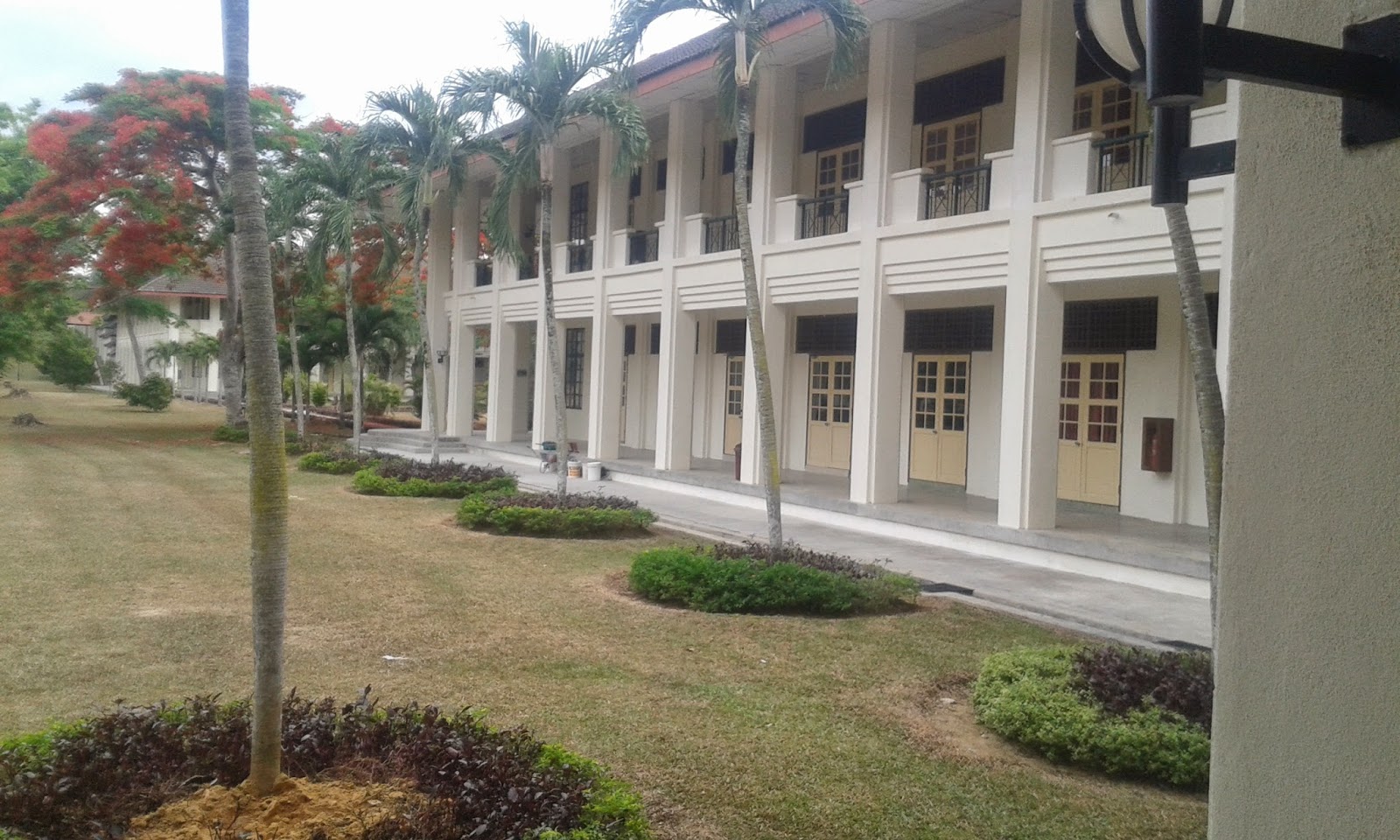 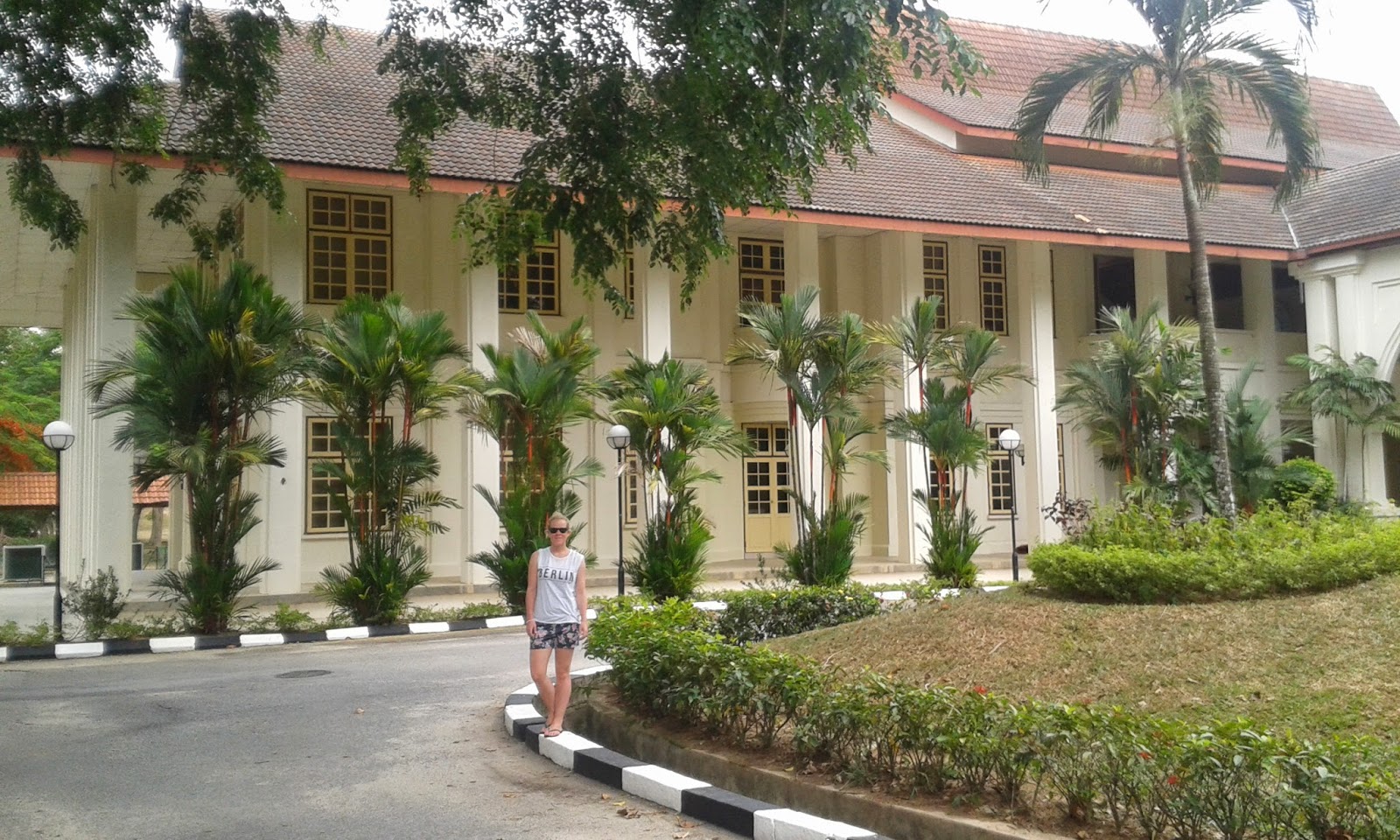 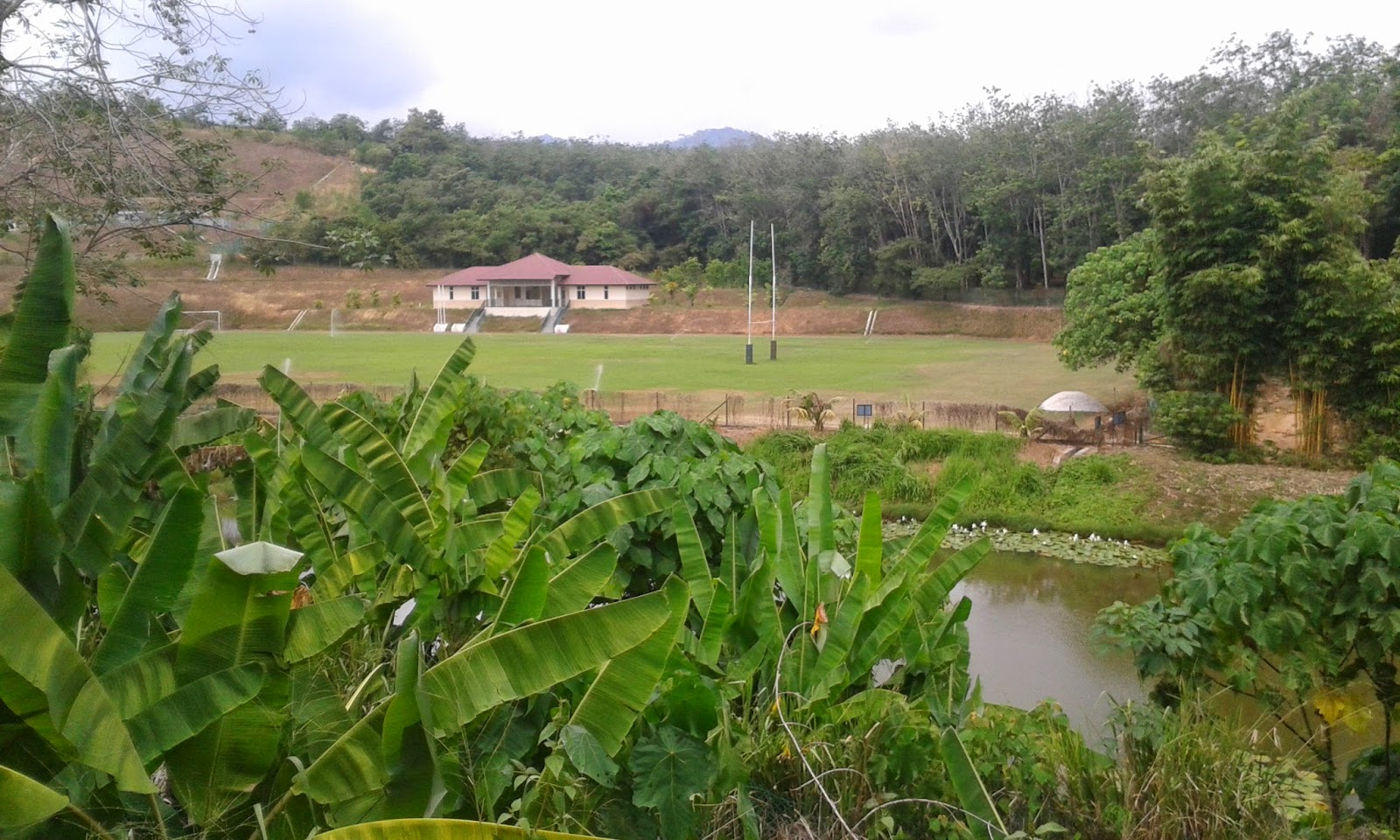 Posted by Henry Wilkinson at 01:42 No comments: