Scandinavia from the back of a car

I have always imagined a business trip to be a glamorous activity; crunch meetings with powerful people followed by a cigar, celebratory drinks and a pretty air hostess. Perhaps I was thinking of an 80’s cliché, but the real thing has always been a little disappointing. They tend to involve a powerpoint presentation in the west country followed by questionable food and itchy motel sheets. No glamour and certainly no chance of exploring a different city.

Even when I have ventured somewhere more exotic things have tended to be a bit of a let-down. Take for instance my trip to San Francisco a few years ago; on the flight out I was in a prime seat behind a child vomiting and overlooking the wing as it was struck by lightning. I spent the subsequent two days of my weekend in a conference centre not seeing the Golden Gate Bridge, not riding the trams and not walking along Fisherman’s Wharf before coming down with flu on the plane back.

I had fairly grounded expectations therefore when I took my first business trip to Copenhagen and Stockholm earlier this week. Scandinavia has long been a place I wanted to visit and I was already booked for a short holiday in Oslo this coming weekend. Being tall, blonde and having grown up with an overactive imagination close to York, the capital of the Viking kingdom of Danelaw, I consider the region to be, somehow, part of my origins. Whilst the two days shadowing my boss in meetings didn’t allow me much time to get a feel for my ancestral homeland I did, however, manage to gain some skin deep first impressions. To my surprise it turned out to be a rather good trip.

We were picked up in Copenhagen by Chris, a wiry middle aged man who spoke impeccable English with an American lilt. He had been arranged by the organising broker to chauffer us between our three back-to-back meetings and then back to the airport for our flight to Stockholm. I was eager to look professional in front of my boss so I kept the conversation to a minimum; I got a basic language run through before returning to my notes and the view from the back of the black saloon.

There was snow on the ground and the weather outside was murky. The ride from the airport into town was grey and it was only when we reached the warehouses along the waterfront that the city started to come to life. Copenhagen appears to be clean and crisp with understated red brick architecture. It is evidently prosperous but, unlike the imperial boulevards of Paris or London, it is not trying to make a big deal about it.  Close to the centre there are a number of icy lakes apparently, according to Chris, clean enough to swim in during the summer months. Although I only saw it from an air-conditioned car and offices I liked Copenhagen and I will be back.

If Copenhagen was cold, Stockholm was freezing. In the UK we talk of weather being “too cold to snow”, which I can assure you is complete crap. Stockholm was both “too cold” and snowy. After checking into the waterfront Radisson Hotel I shuffled, slipped and fell my way towards Restaurang Richemore for some exceptional Swedish cracker bread followed by warming meatballs. At ten pounds a pint I avoided alcohol and stuck to water. 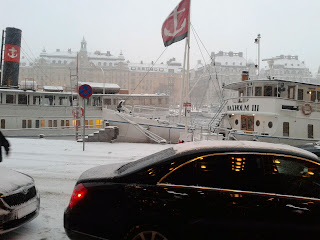 Looking out from the Radisson in Stockholm
I woke on Tuesday to BBC news and events unfolding in Mali. Africa, the usual subject of my writing, was utterly unreal at that moment. Outside was a blizzard and it seemed somehow impossible the humanity can survive in such different environmnents. But survive it does. Indeed Stockholm thrives on the cold weather; with the exception of a train that a cleaner had taken for a joy ride the night before, public transport still ran and the cyclists still pressed on. We were picked up by a female driver who cheerfully talked us through the town’s highlights as she peered through the snow filled sky and took us to the first of our four meetings.

The city is a series of 14 islands and, unsuprisingly, fish features heavily in the local cuisine.  Usually on roadshows food is only consumed at snatched intervals but on this trip we were invited to a lunch meeting at the upmarket WedHolms Fish restaurant. WedHolms is where the well heeled Swedish gent goes to eat and be seen. It is not hard to see why.  I am not a massive fish lover, but what was on offer was tasty; no fancy tricks, just well cooked simple food. Between writing minutes and diverting questions to my far more knowledgeable boss, I managed to work my way through a pickled herring starter and salmon with Hollandaise sauce for main.

Much like the day before, I make the majority of my impressions from the car, but I did get an hour to walk through the historic centre of the city before my flight. In the newer parts of the city there is a bustle on the pavements as people go about their business. The broad stone clad streets are full of people wrapped up against the elements. In Gamla Stan the pace is slower. The narrow yellow painted streets that lead up to the cathederal are deserted. I saw a couple of Americans trying on a Viking helmet at a souvenir shop but otherwise I seemed to be the only one out sightseeing. Perhaps, unlike the Swedes battling blizzards on their bikes, the less hardy  foreigners come back when the snow melts? 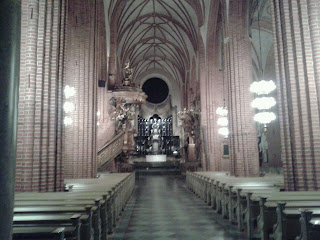 Inside the Cathederal
So what have I learnt? The Scandinavians are a hardy bunch and no, business trips still aren’t all that glamorous -but they can be a hell of a lot better than powerpoint and flu! Can you really get to know a place on a business trip? Well, no, but you can get one hell of a first glance. It has whetted my appetite to start exploring Scandinavia in my own time.
Posted by Henry Wilkinson at 12:06