"This is Henry Wilkinson reporting for ETV Ghana"

It’s been a while since I have posted but life has been very busy. Homesickness has also periodically raised its head. There is nothing worse than writing when you’re tired or feeling down so I have been keeping my thoughts to myself. Only now do I feel that I can let everyone know what I have been doing this month.

In a nutshell life has been completely surreal! I now work three days a week as a news journalist for ETV Ghana. Up until August I will continue to work for my human rights organisation for two days a week. Thereafter I will be full time at ETV until the end of my contract at the start of October. After that? Who knows? As my parents would say, one day at a time!

In the last few weeks I have interviewed a whole host of Ghanaian hip hop stars at an open air concert in Takoradi, been a guest on a TV breakfast show to talk about gay rights (Ghana is in the grip of fervent homophobia at the moment) and reported on issues ranging from world population rise, the Ghana national rugby side and aid effectiveness. So far I have averaged a report a day, some of which are on my YouTube channel.

Unfortunately the internet is so damn slow. I only have patience to put up some of the better/ shorter ones!

As of tonight Eric and George finally leave the room! Over three months after they were supposed to, but at last I have a place of my own! I am typically woken by them getting ready for work at six. Having been under a fan all night the mornings are cold and I rise to put on a t-shirt, huff and puff a little bit before returning to the floor for an uneasy hour drifting in and out of sleep.

At seven both of my unwelcome housemates have gone. It is only then that I get myself up and about. First things first, I tune into 101.3fm for BBC World Service. A friendly British voice and an overview of the top headlines are a welcome change from constant Twi. If I haven’t come up with a story for the day ahead, 7.30’s Network Africa also provides some inspiration.

Breakfast is now cornflakes and long life milk. For a long time I couldn’t bring myself to pay the astronomical prices demanded from Koala supermarket. Instead I would get an omelette from one of the roadside shacks. However there is only so much oil and egg a man can take.

Like at my human rights job, ETV is a five minute walk from home. I am in the news room at 7.45 to check emails, facebook and more headlines. At eight it’s the morning news meeting. All journalists gather to share ideas with the news chief - The room is air conditioned, without natural light and with a number of TV’s on the wall playing output from CNN and rival channels. - After half an hour or so angles and emotions are decided upon and the eight of us are put on our various assignments.

Our initials, stories and deadlines are chalked on a board and we are allotted a cameraman, a car and a deadline. To make things tricky it is typically two journalists per cameraman and per car. To compound matters my drivers or cameramen often go AWOL, leaving me waiting by a car, looking at my watch and ringing any potential interviewees to guestimate when I could meet them.

Especially as a new journalist, getting contacts is a real problem. I don’t know enough people for a start, whilst those who know of me often suspect my motives. Many Ghanaian’s don’t like the way Africa is perceived in the western media and as a white "journalist" I am treated with caution. Others just don’t seem to have a relevant phone number. Very few organisations have a website and those that do often have numbers that will never connect. Nonetheless, after a series of false leads, frustrating conversations with receptionists who don’t understand a word of my English accent, I come up with someone. I then set off out into the streets of Accra. 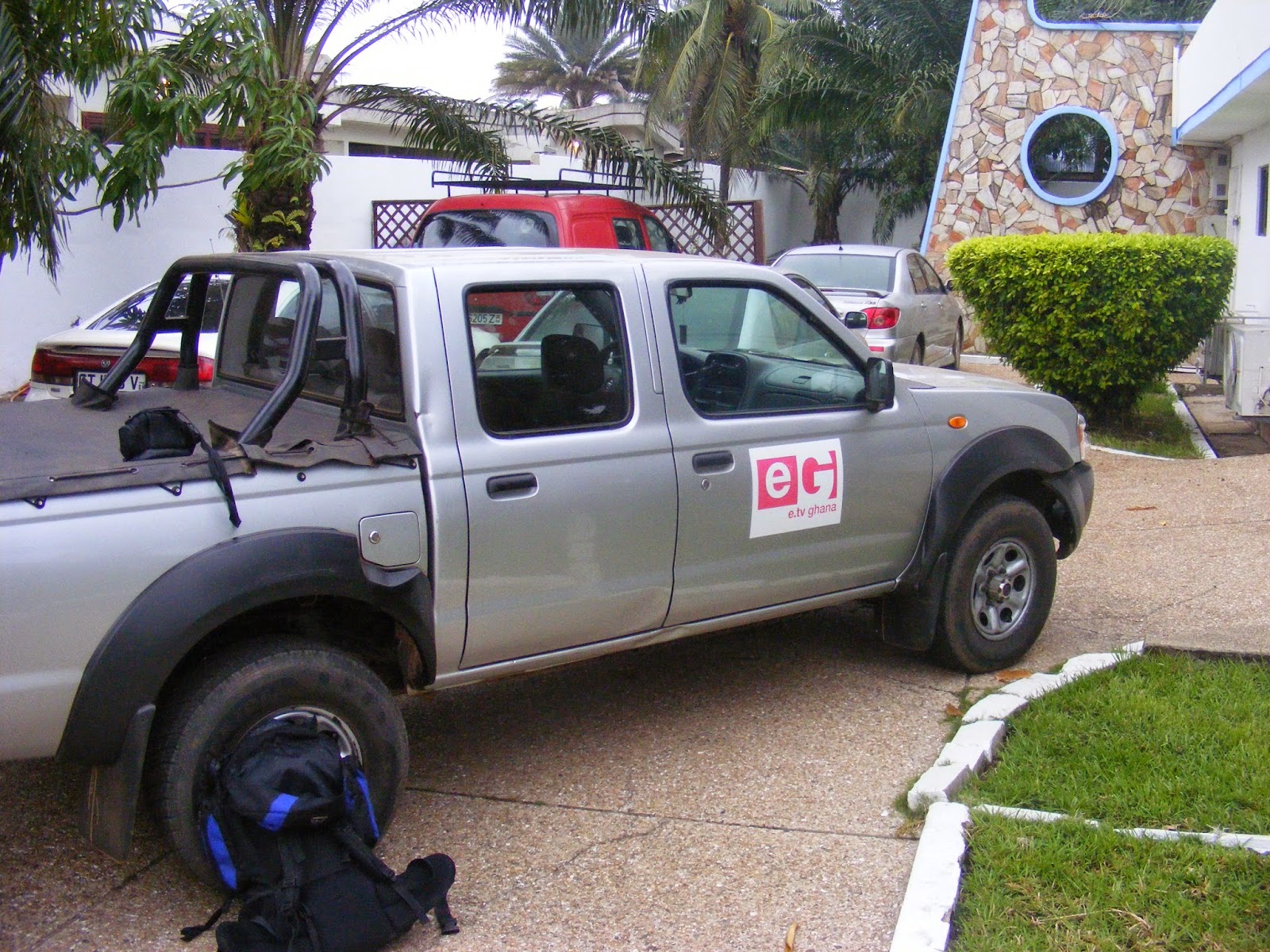 Going out on location is without doubt the best bit about the job. The drivers know all the short cuts and rat runs in Accra. This means that I drive through areas of Accra that I would never see using public transport. Yesterday in a rush to get back to the office my driver took me through one of the slums to cut out a mile of gridlocked dual carriageway. The 4x4’s wheels were on the lip of an open sewer on one side, and a whisker away from people’s shacks on the other. This was after doing an interview in one of the city’s more affluent neighbourhoods. The two sides to Ghana in the space of an hour. A “normal” day at the office.

In terms of my interviewing technique, I think I am getting better. That is also the same for my stand up in front of the camera (The bit where I say, “this is Henry Wilkinson reporting for ETV Ghana”). I still need a couple of takes but the butterflies have gone. The majority of my colleagues don’t bother with a stand. However I was advised by a female journalist from America, who was at the station for my first week, that if you want to make it in TV you need to show that you are comfortable in front of the camera. I am not sure whether I do want to “make it”, but by putting myself out there I am at least keeping my options open.

I get back to the office in the mid afternoon. I often don’t get the time for lunch so I top up on sugary drinks before settling down to write my script. This is basically a word for word account of what I will say in the report. It also maps out where I will place interview snippets and my stand. This script is then looked at by the editor before I can do my voice over.

The voiceover is recorded on a boom microphone in the studio. Its then to the editing suite. Here visuals are put to the story and interview snippets are inserted. This is trickier than you would think. I have to select the best phrases from fifteen minutes of footage. As for visuals, they are usually captured by the camera man, but as a lot of my stories have an international focus I need to search for extra images footage from the internet.

The news goes out at eight and I usually complete the editing process by seven thirty. I walk home exhausted and with a splitting headache but with the pleasant feeling I have achieved something.

Its tough. I have no TV training, the hours are long and I am the only non Ghanaian in the news room. I miss conversing freely with someone who knows where I am coming from. Can I hack journalism long term? Not sure. But am I learning from it? Absolutely! To borrow a phrase from a previous post, its about “living life not just passing through it”.
Posted by Henry Wilkinson at 05:37 1 comment:

June makes way to July and the summer rainy season is still in full swing. The rains, come in short, sharp and heavy bursts roughly every forty eight hours.
The heat and regular cloud bursts has turned Accra into a sea of lush green. Looking out from the balcony at work a canopy of palms and fruit trees obscure the sight of the Nkrumah ring road and much of the city beyond. Were it not for the giant, and astonishingly ugly, president’s residence on the opposite hill you could be forgiven for thinking that Asylum Down is a small town marooned in the forest.
On street level green is also evident everywhere at the moment. Every square inch of spare earth has been hand sown patches of sorghum, millet and maize. These West African staples all grow at a phenomenal rate. In the twoish weeks that I was away two metre high Sorghum plants had appeared next to where I train for rugby at Cantoments.
Less happily I also came back to find my best suit in a coat of white wispy mould. It appears that a hint of sweat on cotton soon supports an ecosystem here so I have taken to washing pretty much everything after I wear it.
Rather than paying someone else to do this, I do my own in a bucket after work. I sometimes wonder if my shirts come out dirtier than when they come in but at least I do get a warm glow about my new found frugality. The only financial outlay for a week’s washing is a 25 peswas bar of sunlight soap and, if I have spilt red-red over myself, maybe a bag of OMO pre soak. (This means we save enough money to buy a big plate of Jollof rice and fried chicken each week- my Friday treat!)
After soaking, lathering and rubbing my collars, sleeves and pits together I put them into a fresh bucket of water and in wine making French peasant styleee, I pound the contents of the bucket with my feet as I shower. After washing I hang out to “dry” over night. Come six am I usually wake to the sound of a new storm rolling in. Some shirts are on the line for a week.
Posted by Henry Wilkinson at 05:18 No comments: